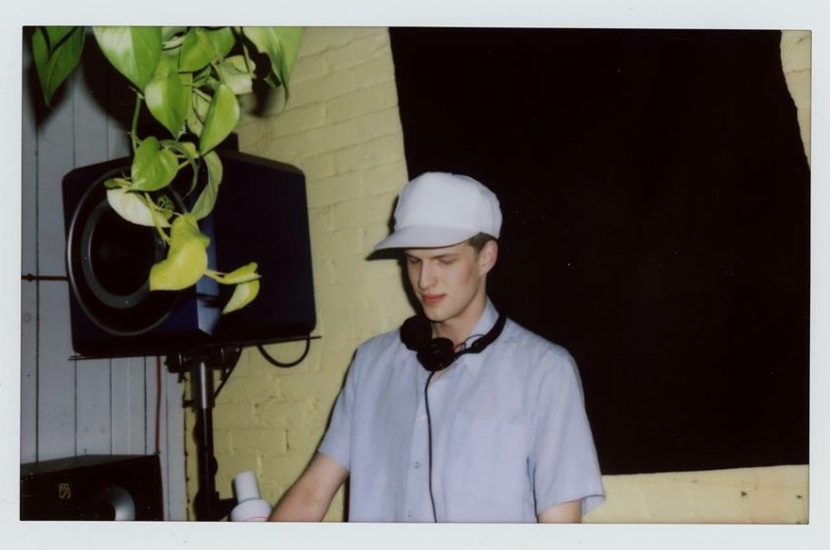 Our first guest mix of the new year comes from Paul Trafford, from Forbidden Planet in Montreal. I first met Paul at a Forbidden Planet / Boiler Room afterparty for MUTEK where I was DJing, then started to follow what they were doing afterwards. Very pleased to have this mix from them, as well as the excellent interview below, where Paul talks about his introduction to techno, a primer on Forbidden Planet and La Brique, and some names to check out in the Montréal scene.

To start with the basics, what got you into electronic music and what drew you to start DJing?

I started making electronic music on the Gameboy camera’s built in sequencer, trippy h, during high school. Did a lot of tracker / chiptune music with Nanoloop and Pxtone. Spent a lot of time on Soulseek searching for video game soundtracks and other nerd music… A lot of Koji Kondo (Zelda), Yasunori Mitsuda (Chrono Trigger, Xenogears), Yellow Magic Orchestra, then Government Alpha. Somehow I discovered Susumu Yokota’s “Acid Mt. Fuji” and X-103’s “Atlantis.” I think those were my introductions to techno. I was getting into house music at around the same time through listening to the fictional radio station “SFUR” in GTA: San Andreas, looking up the tracks and hanging out in the Soulseek house music chatroom.

Anyway, I remember being completely mystified by these techno records. Listening to it alone in my parents’ house, staring at the album art on my laptop… I’d never met anyone else who was into techno. I wondered: was there really a time and place where this music belonged? What could it have been like? Who was it meant for? I guess before then the video games had provided me with the context.

That was in Ottawa. There’s no real techno scene there… I never found a place where it belonged. So these fantasies were there to fill it in. I watched a few 90s rave videos on Youtube, read “Techno Rebels,” cruised Discogs comments sections… Constructed my own idea of that past. Those fantasies continue to drive me through techno different ways. It’s difficult to explain.

How did you and Jürg meet and start Forbidden Planet?

I met Jurg through some mutual friends shortly before moving here from Ottawa in November 2012. He told me that he was starting a label, that D’Marc Cantu was doing the first release. Turned out that we were excited by a lot of the same techno. I came to Montréal to do music, to DJ. Even before we’d met, I had it in my head that I was going to be throwing parties, inviting artists I admired to play here.

Forbidden Planet is Jurg’s project. I’ve been involved with it because we share similar ideas and aesthetics, and I felt that I’d rather do what I could to make his label and events great than to start something of my own. I’d be asking him to play alongside me at the parties I did anyway, and we’d be booking the same artists. Meeting another person so devoted to techno, it was invigorating. It was real. I naturally wanted to be in that environment.

There’s been a lot said about La Brique, where you had many of the parties. What can you tell us about the space and your involvement in it? What does the future look like for it, and what went on there?

For those who are unaware, La Brique was a DIY music space here. It had been running for 8 years or so. It enabled so many artists to do their thing freely. I became involved with it because i wanted to play records loud, alone and late at night. The parties came a few months later when i started some noise/techno parties called “Above The Door.” but yes, it feels as though I’ve just woken up from a deep, beautiful dream. By the end, I lived there alone with my cat, Walter, made music whenever I wanted, helped with the finances and logistics of running the space, invited friends over to hang out, played records and threw parties. I miss it. Listen to this interview by Sam Lu for a bit more information. 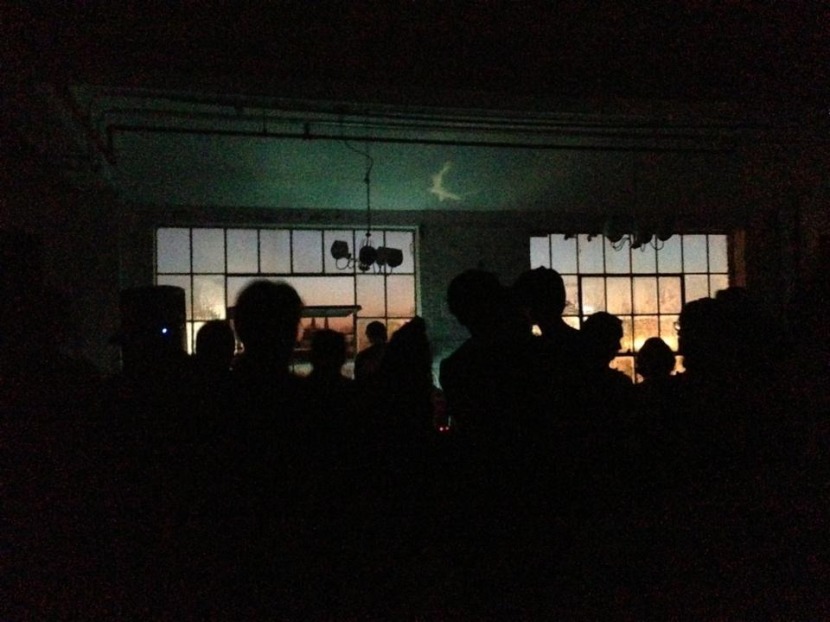 Forbidden Planet is now a label in addition to a party. What made you want to start up the label, and what can we expect from it in the coming months?

The third record from Boreal and Lncroy is out soon. They’re from the West Coast of Canada. My record will be out sometime after that. Jurg’s touring Europe, playing a few dates in Poland and Berlin, then moving to New York City in February. I’m saving up to travel and play a few dates wherever they appear, too.

Do you have any Montréal producers or djs that you admire, or feel are underrated?

I admire so many of those around me. Being at La Brique introduced me to all of the electronic musicians working outside of the techno scene in Montréal. Pierre Guérineau and Marie Davidson, two close friends who practiced at La Brique, they have a project called Essaie Pas. My friend Alex Scarfone does noise as GRKZGL. He’s got good taste and knowledge of wilder techno bits. Another close friend, Andrew Alain, does noise as Stanley Kindly. It’s brutal. He has a good collection of industrial and noise. Always hear cool stuff when we hang out. Last time was some porno noise picture disc from the 80s.

Alex Moskos as DRAINOLITH… Check out his record on Spectrum Spools. Jesse-Osborne Lanthier and Bernardino Femminielli. Both have solo projects, and started a project together called “Femminielli Noir.” Jesse played a rad live set at Forbidden Planet 11 w/ Bill Kouligas.

Francesco de Gallo / Hobo Cubes… Sweet. He also runs the veritable institution of underground electronic music in Montréal: Hobo Cult Records. The Booma Collective. Jurg and I live with this crew. They’ve just released a compilation, and Oren Ratowski’s first record is out now too. That’s more of an electroacoustic affair.

My neighbour Rick Wang has an MPC and good synths. We’ve been jamming. He’s doing a Forbidden Planet record at some point. I’m excited for it. I’d like to do a record together with him too.

Outside of music, my friend Christopher Honeywell is an excellent photographer. He sometimes takes photos at the Forbidden Planet events. Finally, my friend Michael Lifshitz is a tremendous psycho-existential mentor and supportive friend.

I don’t find that any of them are underrated. 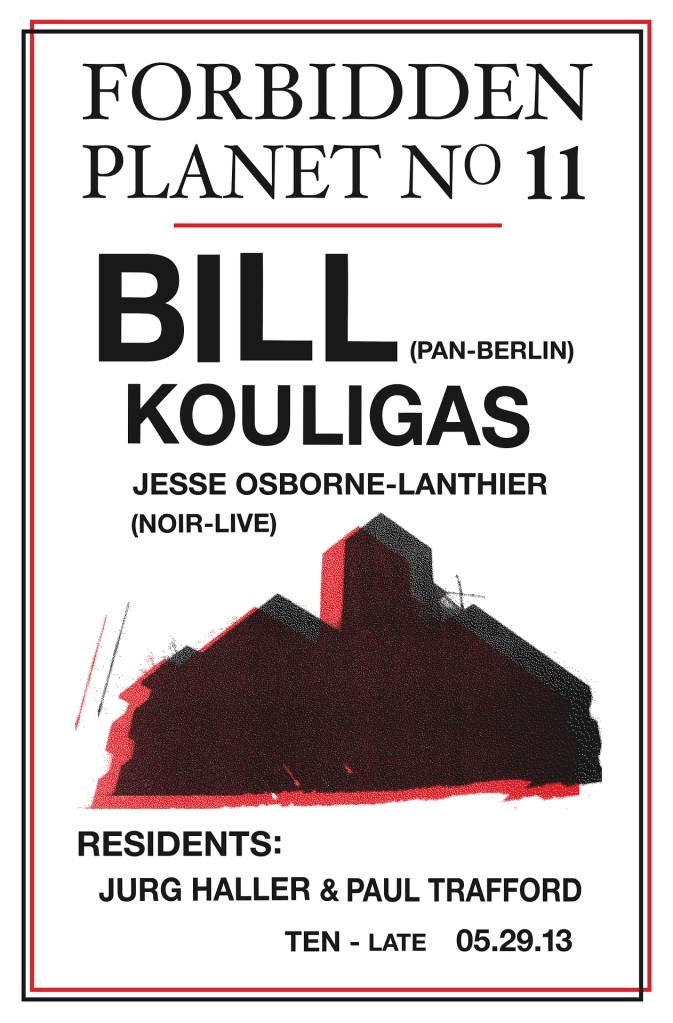 What struck me about the scene in Montréal, as an outsider, was there was a much more open and friendly feeling between parties – more of a sense of doing it for the love instead of trying to compete for bodies in the door, especially in comparison to a lot of other places. Do you think there’s any truth in that?

I don’t travel much, so I’ve never been directly exposed to the techno scenes or been to parties in other cities. I have a vague idea of how they operate. But it seems that there are good parties elsewhere. Meandyou in Manchester, Mutual Dreaming in New York, World Unknown in London are a few that come to mind. I’m happy though. All of the artists we’ve invited felt that playing at Forbidden Planet was a tremendous experience.

The people who come out to the parties in Montréal rule. They know good music and aren’t afraid to get weird, dance to some oblique techno. I’ve always felt like I could play what I wanted, to experiment. I’m very appreciative of that. Also allows us to bring in newer artists or people who aren’t as well known… That’s important to me.

I don’t know about money. I don’t care. This is all a way to bring the fantasies I mentioned earlier into reality. I do it for the art of techno, the preciousness of a unique communal experience…to extend into a higher realm for a bit.

What have you got planned for the future?

To finish a few records, for both Forbidden Planet and some other labels. I’ve been pretty anxious.. There’s a loooot of stuff sitting on my hard drive and I’m starting to feel awful for not doing something better with it. I could release a 5 CD compilation of ditched tracks for this first record. I get bored of them quickly. Jurg probably hates that habit, too.

Otherwise, I’d like to play in some other cities, to travel to different countries…dig for records, meet new friends, soak it up.

There are a few artists I hoped to have at La Brique before it closed. Mix Mup, Ben UFO, Steve Summers, Shawn O’Sullivan, Levon Vincent, Disco Nihilist, DJ Sotofett… I’d like to start up a new space to make that happen sometime.

Finally, what can you tell us about the mix?

I just started playing. Ended up going the hard techno route. Most are records from the late 1990s i’ve found while digging here in Montréal. It was mixed with two Technics 1200s and an Ecler Nuo 3 in The Furnace, Montréal.